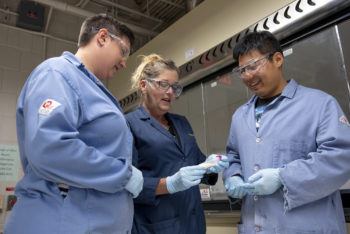 As perhaps is the case with several of you, our team returned from K 2019 last week with quite a bit of news both in terms of trends in the plastics industry—namely, sustainability and the ‘Circular Economy’—as well as actual product launches. The latter, when it came to materials and additives, oftentimes was directly linked to these leading trends. For example, SABIC commercially launched what is reportedly the first renewable feedstock polycarbonate—60% of this PC is made from tall oil derived from pulp waste.

Last December, we featured a blog after being contacted by U.K. start-up Teysha Technologies regarding their ‘plug-and-play’ bioplastic platform that results in different grades of PC. Here is an update and further clarification on the origins of this technology and where it’s heading. This came to us through Texas A& M University, which announced that a recent sponsored research agreement between it and Teysha Technologies has brought together top international research scientists and elite process and commercialization experts dedicated to a common cause: developing unique intellectual property aimed at solving the world’s plastics pollution problem.

Texas A&M chemist Karen Wooley and her multidisciplinary research group within the Texas A&M Department of Chemistry have been working over the last decade to perfect chemical approaches capable of changing the game where plastics and the related global glut are concerned. They have succeeded in synthetically transforming sugars and other renewable bio-sourced feedstocks into sustainable polycarbonates that degrade in water to regenerate their natural building blocks and are customizable to fit a variety of applications.

Across the Atlantic, meanwhile, as we reported previously, an enterprising group of technologically savvy industrialists with the scientific acumen to match had been searching the past few years for versatile bioplastics that could form the basis of a potential commercial foundation. As clarification, then, it turns out the two teams eventually met and joined forces, resulting in Teysha Technologies, which licensed Texas A&M University System intellectual property surrounding the bioplastics technology.

In addition to the efforts underway with administrative support from the Texas A&M Division of Research, Wooley and Texas A&M Assistant Research Scientist Ashlee Jahnke assist with industrial translation and commercial adoption as chief technology officer and head of research and development, respectively.

Explains Wooley, “Teysha was founded by Matthew Stone, Teysha’s managing director, and Ashlee and I were added to the board later to help with the technology development, which is supported through continued research here at Texas A&M through the sponsored research agreement. It ensures that further research and development can now be done, providing a pathway to translate the chemical technologies that began at Texas A&M to deliver real societal benefit.”

Jahnke describes the team’s technology as a plug-and-play system in which various additives can be used to modify the properties of the eventual polymer produced, allowing for tunable durability and biodegradability, setting it apart from other bioplastics solutions currently under development. The polymers are characterized by a diversity of shapes, sizes and fabrication methods and feature different chemical, physical and mechanical properties best suited to the situation or need and desired outcome.

As previously reported, Jahnke concedes that all the plastics they are producing are polycarbonates, but many also contain ester bonds. As such, they can also produce simple polyesters using their technology platform. “We can produce a wide range of plastics because our plug-and-play platform allows us to use various natural product monomers as polymer building blocks, and our current focus is on various grades of polycarbonates.”

Sums up Wooley, “It is quite rewarding that this Texas A&M research is leading to globally impactful technological developments and solutions that appeal to an international market. At the same time, our key missions are to advance fundamental knowledge, train the next-generation work force and inform the public, all while harnessing the distinct scientific competencies and advantages within Texas A&M’s broader infrastructure that makes it all possible.”

Link to the original article – https://www.ptonline.com/blog/post/texas-am-teysha-technologies-team-up-to-advance-research-into-sustainable-polycarbonate